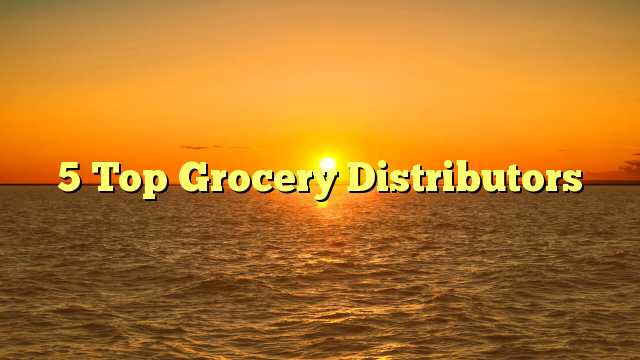 In 1962 Walmart started in Arkansas. Since then it has grown into a retail giant and the top grocery distributor in the country, with over 5,000 stores and clubs nationwide. Walmart serves customers and members more than 200 million times per week around the world.

The Kroger Company has grown to become one of the largest grocery distributors since its founding in 1883. This American retailer is the country’s largest supermarket chain by revenue and second-largest general retailer. Kroger is one of the top grocery distributors thanks to its 36 distribution centers that deliver its products to 2,622 stores in 34 different states across the nation.

Costco Wholesale Corporation is an American membership-only warehouse club that provides a wide selection of merchandise. By keeping costs down, Costco is able to pass the savings on to its members. Costco is one of the top grocery distributors in the nation as the company retains 604 warehouses, with 437 in the USA, 82 in Canada, 32 in Mexico and the other 55 in various international locations, including Japan and South Korea. The company has over 140,000 employees and annual revenue in excess of $77 Billion dollars.

SUPERVALU is a leader in the grocery industry. The company and its 35,000 employees serve customers across the nation through a network of 3,420 stores composed of 1,900 stores serviced primarily by SUPERVALU’s food distribution business, 191 traditional retail stores and 1,334 hard-discount stores, of which 957 are operated by licensee owners. Annual sales total approximately $17 billion. SUPERVALU is a well-known, top grocery distributor, stocking shelves and distributing goods all across the U.S.

Food Services of America is a privately held, family-owned broadline foodservice distributor that serves customers throughout the Midwest, West and Alaska. This customer-focused company is part of Services Group of America (SGA), ranked by Forbes as one of the largest privately-held companies in the U.S.

As a top grocery distributor, Food Services of America is able to manage the needs of grocery stores big and small. They serve grocers of all shapes and sizes, including: independent grocery retailers, chain grocers, public and private retailers, national customers, regional retailers and local grocers.

Food Services of America has become one of the nation’s top grocery distributors, by providing a remarkable level of customer service, using the latest technology and providing a superior suite of value-added tools for customers’ growth and success. Food Services of America serves customers throughout the West from its 10 regional distribution centers.

How Starting a Product in Convenience Stores Will Lead to Sales

3 Closeout Scams That You Need To Know!
Scroll to top